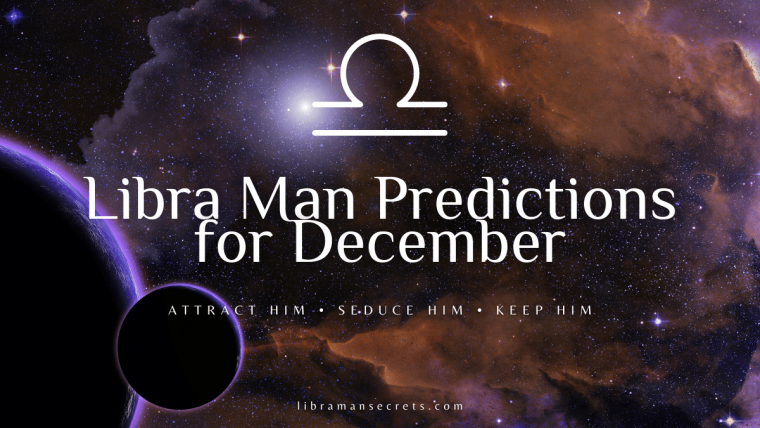 Hello, my dear readers, how’s life? I hope all is well and in order, for I come bearing a shiny new gift – the Libra man’s Horoscope for December is here, and I invite you to dive right into it with me!

The first week of December might put the Libra man in a melancholic mood, and he could be prone to a bigger alcohol intake than usual. In order to save his gentle, romantic soul, you should ask him out on as many dates as possible, and you should seduce him, trust me.

The second week of December is not an easy one for the Libra man, as the Gemini Full Moon and Mars Retrograde make for a very sharp and combative nudge out of the diplomatic door. The Libra man’s mood might be heavily spoiled during this transit, so make sure you’re there for him to vent. If you’re not capable of letting him vent and keeping your two cents to yourself, then it’s best if you guys have a short break from seeing each other. Better safe than sorry.

The third week is perfect for all those Libra couples who’re searching for shared homes. For those who are not there yet, the Libra man’s focus will be on his domestic life and health during this week, so be prepared to receive less “face time” from him.

The final week brings forth a mighty Super New Moon in Capricorn that takes place in the Libra man’s fourth house, and there’s also Jupiter re-entering Aries and his seventh house. Now is a perfect time to move in together, or buy a house together. If you’re not at that stage of your relationship, then make sure to do something that can turn into an everlasting, awesome memory for both of you.

During the first week of December, the Libra man will have a witty sense of humor, and he’ll be exceptionally flirty, thanks to Sagittarius Venus in close proximity to Mercury. His eighth house of intimacy and shadows will also be active, so you can expect a lot of flirting from him.

Libra is one of the lustful signs of the Zodiac, which means that this man is on the prowl for sexual pleasure all of the time, combine that with his ruler residing in Sagittarius (a Mutable, Fire, and also lustful sign), and you get a sex-machine.

He should, however, pay closer attention to his health, especially with alcohol dosage and intake, and possible cuts to his arms and shoulders. Although he will be peaking in sexual performance during this time, he’ll also be susceptible to lethargic thoughts and melancholy.

It’ll be a good thing if he’s not alone during this period, so if you have time on your hands, keep pestering him with dates, romance, and all that fluff that comes with the holiday season. Don’t be intimidated by thoughts of “bothering” him – you’re not, just be bold and take the lead, for now.

Read also: How to Text a Libra man Guide

The Full Moon In Gemini Wreaking Havoc On Mars…

The second week of the month kicks off with a Full Moon in Gemini, in his ninth house, and the Moon is conjunct Mars Retrograde, so this means that the Libra man will be up for some philosophical debates. He might even be more prone to verbal outbursts and squabbles, that’s thanks to the Mars Retrograde influence.

This is not a bad thing overall, because the Libra man has a tendency to sacrifice his inner peace for the sake of group comfort and diplomacy. Now his time has come to say what he means and to give his opinion about some very “touchy” topics.

This is a good time to have his back and support his point of view – if you agree with it, of course. If not, maybe it’ll be better to stay clear of him for a couple of days, until the Full Moon tides retreat and his righteous anger dies down.

He might experience family squabbles as well, as Mercury moves to stubborn Capricorn, and makes challenging aspects with both Jupiter and Uranus. If that is the case, then prepare for the Libra man’s sulking mood in the days to come.

It might be a good idea to be his shoulder to cry on and let him vent, and only if he asks for your genuine advice, then give it to him. If not, keep your diplomatic silence about you and nod to his woes.

Searching For A Happy-Ever-After Home

When the third week comes, the Libra man will find the focus that allows him to be more attuned to himself. When this happens, you can expect him to withdraw, or to tell you about his needs, so whichever you prefer…

He will be asked to invest more time and energy into his domestic life and family, whether he likes it or not. Even if he’s going to be out and about, his family will be on his mind, thus this week his focus on the romance won’t be that strong.

It’s advised for him to wrap up any health checkups or exams he had scheduled during this week, for Jupiter is on the last degree of Pisces, and now is a perfect time for him to catch up on all the health things he lacked focus in the previous weeks.

If there’s any romance or dating to be had during this week with him, it better be something short and sweet, or something that includes him finding solutions to some domestic problems. If you’re so far along in your love relationship as to seek home prospects together, then this is indeed a perfect week to do so.

When the final week of this cheery month comes, the Libra man’s entire focus will be on his domestic life thanks to the Super New Moon in Capricorn. For those of you who have been going through potential homes, now is the perfect moment for buying a house (or a boat, if you plan on living on that boat, I joke you not).

This week is also a very lucky week for the Libra man’s love relationship as well, thanks to Jupiter who re-entered Aries and is now resting on the 0th degree as the Super New Moon takes place.

This is a really potent time for all those Libra couples who’re planning a domesticated life together, or who are deciding to take the relationship further and in a more severe and lasting direction.

It’s a great time for dates that scream bravery and something fresh and new; you’ve got to decide what is that for you, but for me, that would be going skydiving together, experiencing car races, or something adrenaline-inducing like that… But that’s just me, who knows what’s that for you; each and every one of us is different, so don’t let my idea of fun and excitement influence yours.

There you have it my darlings, December at the palm of your hand; now all you must do is get down to work and make this month’s transits work in your favor like never before!

The Libra man’s mood will be mostly even, but the first and third weeks will be quite… exciting regarding his mood and overall aura. The Libra man has a lot of passion and love to give this month, and it would be a waste not to take full advantage of that.

I sometimes hear from readers that while these Horoscopes are helpful for their romantic lives, they crave more detail and more specificity for them. This is totally understandable, and I have figured out a way to make sure you get all the information that you need to take advantage of transits and to know what pitfalls to avoid.

I’ve created a spot here where you and I can talk personally about your own concerns and how to best create the relationship that you have been waiting for. I love talking to my readers and getting to know them as people – and truly, what have you got to lose? Connect with me here.

Wishing you love and light on your journey.

P.S. I just released the 110-page Libra Man Secrets for 2023! It’s the most complex digital yearly forecast I ever did for Libra men. You might want to check it out!