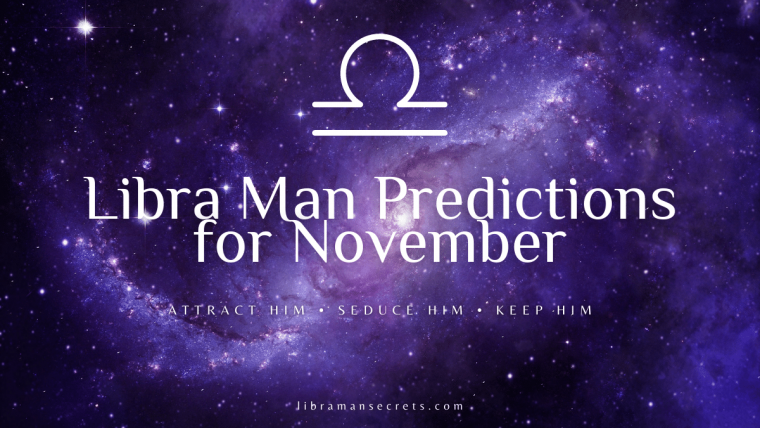 Hello, my lovelies, how was your October? Not too demanding, I hope, for I’ve come with the new tidings (November), and we’re about to start the party, so turn that frown upside down, and let’s go!

The first week of November will have the Libra man focused on sex and carnal pleasures when he should be focusing on bettering his health and casting aside all addictions and temptations. It’s most likely that he will try to replace his sugar addiction with something… sweeter.

The second week brings a culmination to both his internal and moral struggles with the Full Moon Eclipse in Taurus, in his eighth house. This is a very testy time, and there are a lot of opportunities for escalations. The Libra man should tread carefully, and you should pay attention to the knowledge and truths that may come to light during this period, no matter how unpleasant they might be.

The third week of November is reserved for healing and activities that are in accordance with the healing properties of this week’s transits. The Libra man will be prompted and nudged to be honest and open about his emotions, and how he wants to proceed with them. This week might bring an interesting encounter with one of his friends who will shed a light on a part of him you’ve never known before.

The fourth and final week brings about positive change and an opportunity to plant the seeds of honesty and bluntness in your relationship, so don’t ignore it. It’s a great time for fun and adventurous activities and dates that will get your blood pumping.

Come And Get Some, Baby

During the first week of November, the Libra man is going to have a lot of focus on his finances, nutrition, and mental state. This month’s transits are going to ‘go easy’ on him compared to some other men, like the Leo or Virgo man, for example.

During this first week, there are going to be a lot of sexual thoughts and machinations going on in his mind. His mind will be, so to speak, focused on ‘getting some’ and getting as much of it as he can.

However, his health will demand a good portion of his attention. Now is a perfect time for him to review his nutrition and dietary habits, and cut back on alcohol, cigarettes, and sugar. Sugar is the focal point upon which his ‘rehabilitation’ needs to focus on.

The Libra man will seek to replace one addiction with another, and that other will be sex, of course. He will be extra charming, and he will have the power of emotional manipulation and calculation on his side, so beware of being tricked into thinking something more of your relationship than it really is.

Don’t shoot the messenger by the way – I’m only looking out for you!

The Libra man’s unchaste behavior from the first week continues and culminates with the beginning of the second week, as well as a Full Moon Eclipse in Taurus, his eighth house of sex and intimacy.

This Eclipse creates a strong opposition with his ruler – Venus, the Sun, and Mercury. Thus, he is prone to lying and cheating during this time, in order to get his desired result. At this point in time, for the Libra man, the end justifies the means, and he has his head wrapped around pleasure, satisfaction, and gratification.

Although this week might prove to be emotionally draining and hurtful, it’s most likely that this is the week of truth coming to light and his intentions being exposed for what they truly are; it’s up to you what you’ll do with the given knowledge.

The Libra man will feel generally good and ready for action during these first two weeks of November, but he should pay attention to his body and his health, and avoid accidents. All that unexpressed and accumulated electric energy can find a surprising release in a broken bone or a fistfight.

The third week marks a great time for healing and improving the Libra man’s general state of being. Now is a perfect time for dates that include massages, spas, and healing properties like sound baths, Qi Gong, and Reiki.

This week also creates an opportunity for resolving relationship problems and the status of one (or more) of his lovers. Now is a time of complete healing, and this can create an opening for the Libra man to decide what he wants finally, and just how much he wants it.

It’s a good time for hard conversations, and for laying your (emotional) cards on the table. He will feel obligated to do the same, so seize your chance to either take things to the next level with him or end it.

This week is also a good time for receiving advice from a friend and for meeting his long-term friends who have known him for many years. I’m saying this because you might discover things about him or from his friends that you’ve never heard before, and this might help you get a clearer picture of him as a person, and what his character is prone to…

The fourth week of November brings a positive (and forthright) start – there’s a New Moon in Sagittarius, taking place in the Libra man’s third house of communication and thoughts. This is a good sign, for Sagittarius is a very honest and direct sign. Indeed, Mercury doesn’t feel its best there, but Venus (his ruler) feels very open, cheerful, and adventurous.

It’s a great start to the final week of November, and it holds the power to bring very positive and enthusiastic change to his relationships, and to his state of mind. Compared to the dark and sneaky Scorpio, Sagittarius is of much more noble stature and disposition.

This fourth week brings a positive change not just to the Libra man’s state of mind, but also to the state of his heart. Now is a perfect chance to go out on public dates, do fun stuff together, laugh, and simply enjoy each other’s company.

If you want to finalize the status of your relationship and discover his true feelings for you, now is the time to act and see what comes out of it. You’ve waited long enough and have given him enough time and space to decide what he wants, now comes the time for his decision to be made public.

The Libra man might feel (and act) sneaky during this month, for he will be under Plutonic energies more than usual, however, that is no excuse, just a side effect – so don’t allow yourself to be fooled.

Once the New Moon comes around, you will get the chance to truly discover how he feels, and what you mean to him. Until then, observe, pay attention, and mark his cues and words.

If you are still having doubts about the state of your Libra man or feel as though your relationship can use a little bit of a boost, then you might want to book a VIP consultation with me to solve your burning questions.

This way I can dig deep into your unique situation and you can come out on the other side feeling more connected than ever. I’ve reserved some spots for my readers, so if this feels like a call you need, book your consultation with me here.

Until next time, my lovely readers – I wish you all the luck in the Universe on your journey!